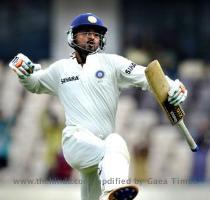 HYDERABAD, INDIA (GaeaTimes.com)- It looks like the second test between India and New Zealand is heading towards a draw as well with both New Zealand openers at the crease showing no signs of getting out. For India, a big blow to the bowling attack happened earlier in the morning when Zaheer Khan walked off due to injury. At the crease presently is Brendon McCullum and Tim McIntosh who are scoring at a healthy rate to ensure that chances of an Indian win is ruled out completely.

The New Zealand fans, however, will be disappointed by the proceedings of the game as the first two days gave their side ample hopes of securing a test win on Indian soil. The hopes were dashed rather brutally on the third day as Harbhajan Singh, the hero of the first test, wrecked havoc on the inexperienced New Zealand bowling attack and scored another century. Remaining not out on 111, the Turbanator has been one of India’s biggest revelations in batting in recent months.

The Indian team might have sniffed chances of a win early on in Day 4 when the New Zealand batsmen came on to the field. S Sreesanth appeared almost toothless without his left arm swing partner Zaheer Khan. Though MS Dhoni has already put on the spinners, the New Zealand openers are looking well settled on the comfortable Hyderabad wicket. India finished at 472 in their first innings in reply to New Zealand’s 350. New Zealand started well in their second innings and are less than 60 away for eliminating the trail-by with all the 10 wickets in hand.