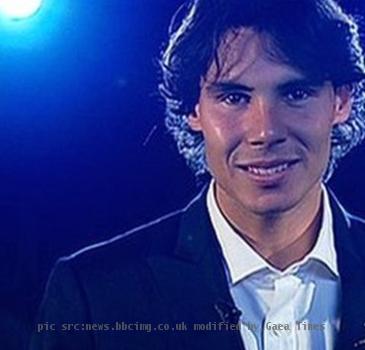 NEW YORK (GaeaTimes.com) — The number one Tennis player Rafael Nadal is awarded the BBC Overseas Sports Personality of the Year award on Sunday.

The 24-year-old Spaniard won a remarkable three Grand Slams in 2010 - the French Open, Wimbledon and the US Open, as well three Masters titles. In winning the US Open, Nadal became only the seventh man in history to complete the set of majors.

The overseas personality award had been claimed in the last two years by Jamaican sprinter Usain Bolt, while Nadal’s great rival Roger Federer has lifted it three times - in 2004, 2006 and 2007.

Tearful Moya confirms he is hanging his racket

Dubai, Nov 17 (IANS/WAM) The UAE and Panama have signed an "open sky" agreement in the Panama City, ...

LONDON (GaeaTimes.com)- The 'Harry Potter' fans who have been waiting eagerly for seeing the las...

Emma Watson has been 'in love once'

MELBOURNE - Harry Potter star Emma Watson has admitted that she has been "in love once", but has nev...

La Paz, Nov 11 (IANS/EFE) The body of a pilot missing for two decades has been recovered from a cras...

Federer says he has asked IMG chief about betting allegation

LONDON - One fixture that stands out above all others in this week's midweek Premier League programm...
Copyright© 2010 The Gaea Times