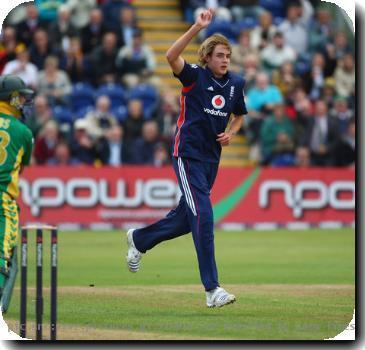 Graeme Swann and Stuart Broad were once again the stand out performers, as they shared nine of the ten wickets in the innings, with Swann claiming the spoils with 5 for 54 in 21 overs.

South Africa resumed their fight on 76 for 6, with Mark Boucher and Morne Morkel entrenched in a 26-run stand for the seventh wicket, and though Morkel pulled Broad with some confidence through midwicket for the first boundary of the day, he was unable to deal with the wiles of Swann, who continued once again his extraordinary penchant for striking early in a spell.

In total, Morkel faced three deliveries from Swann, and might have been dismissed by the lot.

The first was tossed up from round the wicket and spun sharply past his edge. The second was snicked to slip, where Andrew Strauss couldn’t get a hand on the chance. The third was fuller, flatter, and faster and Morkel was declared lbw for 15.

Paul Harris was the next man in, and he received a rough reception from Broad in particular, who sensed a vulnerability to the short ball, and tested it to the max with a barrage of lifters that struck him variously on the chest, ribs and armpit. But he did his best to endure as he anchored himself on the back foot, and each of his first three fours came from steers through point off Broad, only one of which was genuinely involuntary.

The real body blow for South Africa’s faint hopes occurred at the other end, when Boucher was caught behind of Broad for 29. Umpire Aleem Dar initially turned down the appeal, but Strauss and his teammates were convinced, and the referred decision showed a clear deflection off the glove.

Harris was deceived by Anderson’s late swing from a full length, and Broad - though denied a shot at a five-wicket haul - nevertheless made good ground at mid-off to scoop a low catch.

The honour of the five-for went to Swann, after he had Dale Steyn lbw for three.

The England victory was their first in South Africa since 1964. They now set off to Cape Town with their spirits soaring and the series seemingly theirs to lose.