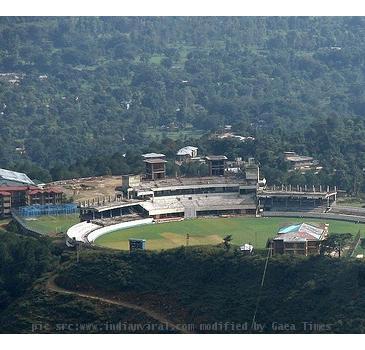 DHARAMSHALA, INDIA (GaeaTimes.com)- The cricket stadium in Dharamshala, Himachal Pradesh will beinauguratedtoday by the Board of Control for Cricket in India (BCCI). Following the inauguration, the 51st match of IPL (Indian Premier League) shall be played between Kings XI Punjab and Deccan Chargers which shall have a host of eminent BCCI officials attending the ceremony to be held at the Dharamshala stadium.

The match in Dharamshala, Himachal Pradesh happens to be an important one for Deccan Chargers as this shall be the decider match for Deccan Chargers for reaching the semi-finals in the tournament. The Dharamshala, Himachal Pradesh cricket stadium shall witness the presence of senior BCCI officials namely Shashank Manohar, Rajeev Shukla and Arun Jaitley who would be gracing the inaugurationceremony. BCCI is speculated to choose Shashank Manohar over Lalit Modi as the new commissioner for IPL. When asked about it Shashank Manohar told the media that any such decisions shall be taken in the meeting of IPL officials which is scheduled to be held in the upcoming week.