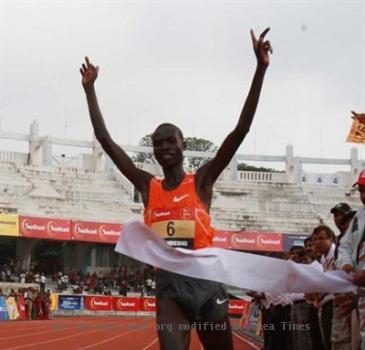 BANGALORE, INDIA (GaeaTimes.com)- Sunfeast 10k which happens to be an IAAF Gold Label Road Race witnessed Titus Mbishei of Kenya along with Ayalew Wude Yimer of Ethiopia emerge out as winners in Bangalore. Reportedly, the Sunfeast 10k race kicked off amidst an overnight drizzle which still had the tracks wet when the racers had lined up for the marathon.

Deriba Merga who happens to be the winner from the last year’s race was one of the leaders in the Sunfeast 10k marathon who was doing the front running for a while until Titus Mbishei came up from the behind. The lead group also comprised of runners like Uganda’s Moses Kipsiro, who emerged as the runner up in the last year’s Sunfeast 10k marathon. He was accompanied by Feyisa Lelisa followed by Kenya’s Titus Masai who had finished third in the RAK marathon. It was at the mark of 6 kilometers when Deriba Merga started slowing down as Titus Mbishei came up from behind to take the lead in the race. Both Titus Mbishei and Moses Kipsiro was running equal to each other as they reached Cubbon Park which marks the eighth kilometer out of the total 10 kilometers of the Sunfeast 10k marathon.

NEW DELHI - Children might love this. Here comes a bunch of English nursery rhymes from Saregama...

MELBOURNE - Sania Mirza will be the only Indian playing in the singles main draw of the Australian O...

A unique event to test Bangaloreans running and cycling skills

BANGALORE - It seems India's Tech hub Bangalore has been well and truly bitten by the sporting bug. ...

BANGALORE - It was literally a runners' day out in Bangalore Sunday. Around 32,000 people participat...
Copyright© 2010 The Gaea Times