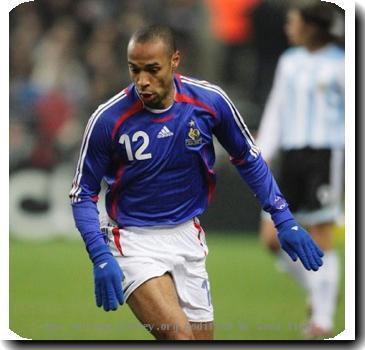 New York (GaeaTimes.com) - The French superstar striker Thierry Henry has joined New York Red Bulls. The club official has announced this news. It is a multi year contract with this French striker. After the hopeless performance of France in the world cup 2010, the rumor about Thierry Henry became very popular. But finally New York Red Bulls signed this internationally famous player. Henry has the great experience to play in the clubs like Barcelona, Arsenal, Juventus FC and AS Monaco. Supporters were pleased by the magic of his right leg. Red Bulls authority became too much happy after signing this 15 years experienced soccer player.

He was the member of world cup, UEFA league, and European championship winning team. He will be available for Red Bulls after 15th July because the transfer certificates have not reached till now and it is expected that his debut match for Red Bulls is going to be the match against English Premiership club, Tottenham Hotspur on 22nd July. Red Bulls supporters are ready to welcome this 32 years old striker. Henry said that he is completely overwhelmed after getting the chance to play Red Bulls and he will keep the glory in his mind.

The New York Red Bulls is an American professional soccer club which is situated at New York metropolitan area. The club was established in the year of 1995 mainly participating in Major League Soccer. This team came under the spotlight after signing the star players. Italian Roberto Donadoni played for Red Bulls in 1996 and 1997. Brazilian superstar Branco played for them in 1997. German Lothar Matthaus in 2000 and Frenchman Youri Djorkaeff was here in 2005 and 2006. But nobody was able to give them a title. Supporters of Red Bulls believe that Thierry Henry will be able to give them a cup.