Team India To Get New Jersey 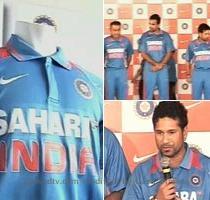 CHANDIGARH, INDIA (GaeaTimes.com)- The Indian Cricket team will be seen sporting a brand new jersey for the upcoming ODI series against Australia. The official apparel sponsor, Nike, unveiled the new jersey on Wednesday, September 29. The Indian players were seen walking the ramp on Wednesday in their new jerseys and it promises to add some glamor and fashion into the already glitzy world of International cricket.

Present on the ramp were Gautam Gambhir, Zaheer Khan, Harbhajan Singh, Pragyan Ojha, Virender Sehwag and Indian batting legend Sachin Tendulkar. Indian skipper and ad star MS Dhoni could not be seen at the launch of the new jersey. Reports say that he landed in the city on the same day from South Africa after his team (Chennai Superkings) won the Champions League T20.

The Indian Cricket team veterans also spoke to the media at the event which launched the new jersey. Gautam Gambhir spoke about the upcoming tour as a challenge for him. He also said that he is looking forward to the 2 test series as well. Sachin Tendulkar revealed in the interview that he will continue to play for his country as he enjoyed playing cricket for his country. The highlight of the evening, however, was Harbhajan Singh’s statements who spoke about his past encounters with the Australians. He joked that the encounters were testimony to the liking that he and the Australians have for each other. His Mumbai Indian teammate Zaheer Khan said that he has recently been focusing on his fitness and also spoke about the importance of good apparel in sports.