Cheteshwar Pujara Showed his Skill in the Tests Match 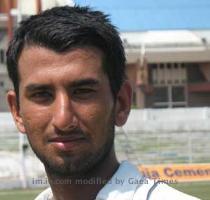 With Sachin Tendulkar scoring 39 not out and Rahul Dravid scoring 13, India made a good start on the fifth and final day of the second test at the Chinnaswamy Stadium in Bangalore on Wednesday.

India lost Virendar Sehwag in the begining. Pujara came to bat at No.3. Earlier, Australia was bowled out for 223 after resuming the final day at 202 for seven.