Jared Allen The Superstar of Vikings 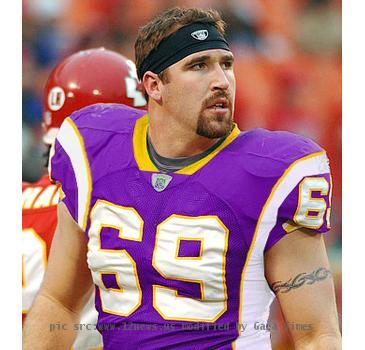 NEW YORK (GaeaTimes.com) — Jared Allen is considered as a Superstar of the Vikings team. In the upcoming game that will be held tonight Allen will be having 73 career sacks.

Jared Allen is known for his play on the field. he is also popular for his mullet and cookbook. He had 14.5 sacks the last two seasons and 15.5 sacks in 2007, so his production definitely is down this year.
It will be a hard time for Allen to increase the number of sacks in tonight’s game as he had to compete Rodgers.

I don’t think there is any need to worry for Jared Allen as he is only 28 now and he has enough years left to bump up his career.