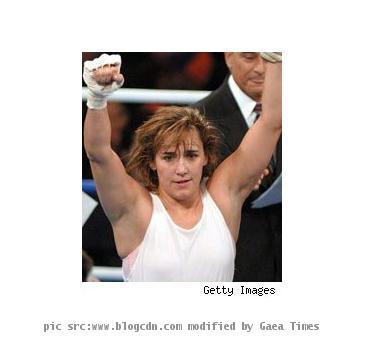 ORANGE COUNTY (GaeaTimes.com)- World’s Best known female boxer Christy Martin was hospitalized last Tuesday after she was allegedly stabbed by her husband Jim Martin. The Orange County Sheriff’s office said that Jim Martin not only stabbed her but also shot her with a handgun. The police is presently searching for her husband.

The police said in the press conference that Christy Martin returned to her home after two days on Tuesday afternoon after being away from home for two days. Jim Martin suddenly attacked her and with a knife and shotgun. Somehow, Christy Martin managed to escape from her home and was flagged down by a motorist to the hospital. After reaching the hospital Christy Martin was conscious and she narrated the whole terrific incident to the investigators. Even when the police reached her place, they found signs of struggle in her room which proved that something happened there.

Though the police did not comment anything about Christy Martin’s health, they said that they are presently investigating the motive behind the whole incident. Even Jim Solomons, the spokesman of the office said that the whole incident proves that no body escapes domestic violence and at the same time the police cannot take any legal actions until Jim Martin is arrested. A gossip site reported that an out of the state caller contacted the police and said that Jim Martin was disturbed as he had a bad conjugal life. Jim Martin used to call his friends to talk about his personal problems. However, nothing can be concluded till Jim martin is arrested and questioned according to Jim Solomons. Christy Martin was unavailable for comments.

LONDON - Playboy magazine is all set to auction off some of its most well known images featuring som...

Winston Churchill's last ever cigar to go under the hammer

LONDON - A cigar that once belonged to late British Prime Minister Winston Churchill is to be auctio...

NEW DELHI - Four percent of buyers at this week's auctions at Christie's, New York, were from Asia, ...

Tyra Banks to auction her dress for charity

LONDON - Talk show host Tyra Banks and a number of top models will be donating their dresses to char...

LONDON - One of the first computers assembled by Apple in 1976 which was sold by the company's found...

NEW YORK (GaeaTimes.com) -- Over a night an amazing trick played by the quarterback for Driscoll...