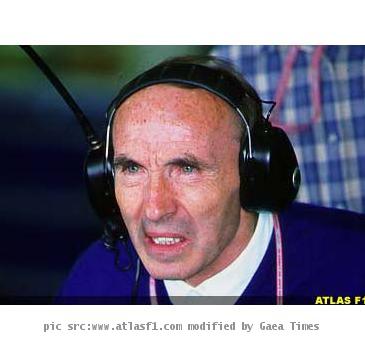 NEW YORK (GaeaTimes.com) — Sir Frank Williams shared a remarkable moment in his life as he was crowned with the prestigious title of Helen Rollason Award at the BBC Sports Personality of the Year awards in Birmingham on Sunday.

The founder and manager of the Williams formula one team was presented with the award, which recognises outstanding achievement in the face of adversity and is named after the former BBC presenter who died in August 1999 after losing her fight with cancer.

Williams, 68, has been in a wheelchair since suffering a spinal injury in 1986. The Williams team have won 16 championship titles and are the third most successful F1 team in history, behind Ferrari and McLaren. In 1999, Williams received a knighthood for services to motorsport.

Filed under: Featured Article, Formula One

LONDON - Coach Arsene Wenger has vowed to give "every drop of his blood" to make Arsenal winners....

BANGALORE - About 60 students from India, Pakistan, Sri Lanka and Nepal will contest in the finals o...

Disabled Brit man rejected for 2000 jobs starts his own business

LONDON - A disabled man in Britain, who was rejected for almost 2000 jobs, has managed to start his ...

WASHINGTON - Scientists say that a new breakthrough in imaging technology using a combination of lig...

CHANDIGARH - A Haryana bureaucrat has been sentenced by a court in Karnal to five years' imprisonmen...
Copyright© 2010 The Gaea Times