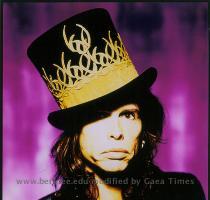 Reportedly, Steven Tyler has just been out of a rehab center and is said to have overcome his habit of taking painkillers which was reportedly affecting his performance. The rumor was strong that Steven Tyler will be on a long break before he can start performing again but his recent performance at the Fenway Park snubs down all rumors. Steven Tyler’s performance stands strong in his evidence that he is all ready to hit the brass tracks. Steven Tyler and his rock pals are all looking forward to their Europe tour which is titled as “Cocked, Locked, and Ready to Rock”.

Following the opening pitch by Pedro Martinez, “God Bless America” was performed by Steven Tyler. The song happens to be a creation of Irving Berlin who primarily penned down the song for the Army but it became the signature song of Kate Smith in the later phase whose elegant singing style gave it the shape of a prayer. Steven Tyler sang God Bless America after the seventh-inning which also witnessed another scintillating performance by Neil Diamond as he performed the all time favorite Red Sox theme song Sweet Caroline. The Neil Diamond song Sweet Caroline is another traditional song which has been witnessed at Fenway Park after the seventh inning and in the midway of the 8th inning for many years.

NEW DELHI - Police and journalists can help reduce by nearly half deaths and serious brain injuries ...

LOS ANGELES - Actor Daniel Day-Lewis has been roped in to play the 16th American president, Abraham ...

Smith 'quite surprised' at dumping of Hauritz for Ashes opener

SYDNEY - Australian all-rounder Steven Smith has said that he is "quite surprised" at the dumping of...

Now, shop at multiple stores and pay with one credit card transaction!