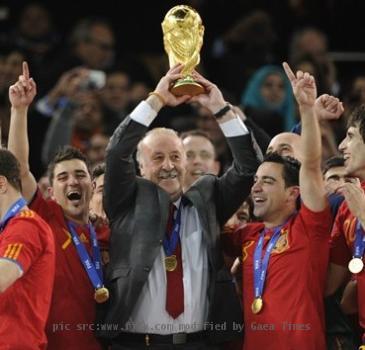 JOHANNESBURG, SOUTH AFRICA (GaeaTimes.com)- Spain became the 8th team to etch their name on the FIFA World Cup trophy as Andres Iniesta drove the ball into the Dutch net in the 116th minute and ended the dream run of the Netherlands side. The Spanish fans saw a more emotional side of the goal scorer as he ripped off his Tshirt to reveal an undershirt that had ‘Dani Jarque siempre con nostros’ written on it. Though he received a yellow card for taking off the jersey, fans all over the world were touched by the tribute paid to the deceased footballer.

In the first half Spain showed their dominance with their fabulous passing and touch football and kept the Dutch restricted to their half of the field. The Netherlands forwards found it hard to go past the gritty and intelligent Spanish defense which had the likes previous match winner Carles Puyol. The aggressiveness of the two teams saw them getting five yellow cards in the first 23 minutes itself. In the second half, the game began to become more evenly balanced as the likes of Robben and Sneijder started to make inroads through the Spanish defense to trouble the so far idle Iker Cassilas. With some fabulous saves in the final of the World Cup, Iker Cassilas justified the golden gloves that he received after the game.

As the game failed to yield a result in the first half of extra time, it looked like another penalty shootout finish was on the way for the fans. Netherlands gave the advantage to the Spanish by becoming a 10 men side after the red card to John Heitinga. The Spanish fans went berserk as Andres Iniesta avoided the penalty shootout by shooting the ball into the far corner of the Dutch net to give Spain their first ever World Cup.