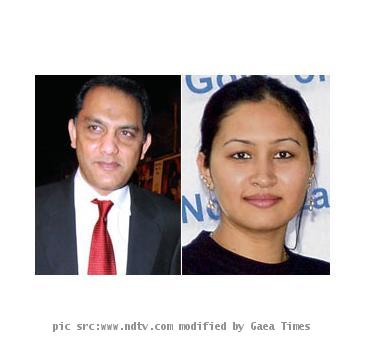 MUMBAI, INDIA (GaeaTimes.com)- If recent reports are anything to go by, then former captain of the Indian cricket team Mohammad Azharuddin has had a major fallout with his second wife Sangeeta Bijlani owing to which the couple are contemplating divorcing each other. The pair, who have been married for the last fourteen years, is said to have called it quits after the cricketer became romantically involved with ace badminton mixed doubles player Jwala Gutta.

A source from the Andhra Pradesh Badminton Association has stated to the media that whenever Mohammad Azharuddin is in Hyderabad, he makes it a point to visit the badminton academy of Pullela Gopichand, where Jwala Gutta often practices. The source further added that on numerous occasions both of them are seen leaving the academy together and head towards a hotel where they spend quality time with each other. His alleged love affair with the badminton player is reported to be the main reason which has propelled him to take the decision of separating from his wife, Sangeeta Bijlani.

In the meanwhile, Mohammad Azharuddin has completely refuted the claims of her alleged link-up with Jwala Gutta adding that these are just rumors which are false and fabricated. The former cricket player has reiterated that these rumors have been triggered off by certain officials of the Badminton Association of India who are against him since he contested in last month’s presidential elections. However, Mohammad Azharuddin went on to defend Jwala Gutta, saying that she is just a ‘good friend’ while adding that she is a good player who should not be dragged in to such a controversy.