Victoria Bushrangers Win Over CSK In Super Over 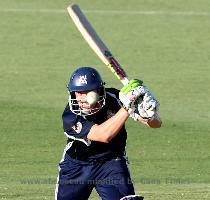 PORT ELIZABETH (GaeaTimes.com)- In what was a low scoring but entertaining match between the Chennai Superkings and Victoria Bushrangers, the Super Over, turned out to be the decider. The match was crucial for Victoria as they needed a win to keep their hopes alive in the Champions League T20. For Chennai Superkings, the match could have sealed their berth in the semifinal, if won. The low scoring tie ended with a highly entertaining Super Over where David Hussey sealed the deal for the Victorians with three sixes.

Chennai Superkings decided to bat first after winning the toss and got off to a steady start thanks to Michael Hussey and Murali Vijay. Though the start was strong, the Victoria Bushrangers‘ bowlers maintained a strong dominance over the batsmen in terms of scoring rate. After the openers fell, some of the big names were due to come in and the Chennai Superkings fans were hoping for some end of innings fireworks. Things, however, remained subdued as both Suresh Raina and MS Dhoni perished without much drama. The IPL Champions finished with a final score of 162.

For the Victoria Bushrangers, the target never really looked threatening as Aaron Finch gave them a blasting start by smashing 41 in 17 balls. Soon however, veteran spinner Muttiah Muralitharan took over and the Chennai Superkings started to look in the hunt, but still barely. It was the bizarre decision by MS Dhoni to toss the ball to Suresh Raina that not only changed the course of the match but also led to madness in the game. As batsman after batsman perished in the last three overs, the almost comfortable chase became insurmountable for the Victoria Bushrangers. Ending in a tie the game continued in the Super Over where David Hussey proved his T20 expertise.