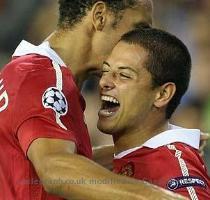 VALENCIA, SPAIN (GaeaTimes.com) The much anticipated Manchester United vs Valencia clash came to a rather dramatic end as Javier Hernandez proved to his side that he is worth his huge signing amount for the team. Winning the Champions League encounter 1-0 not only gives Manchester United the much needed boost in the tournament but also marks their second victory in 19 games against Spanish opponent on Spanish soil. Considering the frustrating draw and the lack luster performance in the game against the Rangers in Old Trafford two weeks ago, the win could give the side the necessary momentum to become one of the favorites of the tournament.

For Javier Hernandez, the goal meant something extraordinary. He explained after the game that the goal was a huge boost to him as he was at the start of his career with Manchester United. He also revealed that he used to watch the Champions League back home in Mexico and felt that it was one of the most important tournaments in the world. Nicknamed Little Pea for his size, Javier Hernandez received a lot of praise from the Manchester United coach Sir Alex Ferguson. He said that taking the chances came naturally to him and said that he was a terrific finisher. Though Valencia had more possession in the game, they rarely looked threatening against the strong Manchester United defense.

Another new addition to the Manchester United line-up against Valencia was Michael Carrick. Coming from an injury he looked somewhat slow in the first half and also made a bad pass to the opponent. Veteran Rio Ferdinand also looked in top form and the coach made his happiness evident at the press conference.