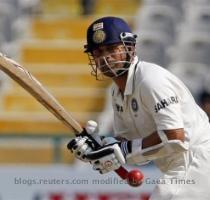 BANGALORE, INDIA (GaeaTimes.com)- The second test between India and Australia at Bangalore has panned out almost identically to the first test on Day 4. Though India looked set to post a huge lead after Sachin Tendulkar’s double ton and Murali Vijay’s maiden century, the Australians have made a strong comeback into the game by restricting the hosts to a paltry lead of 17. Though reports indicate that Indian spinner Pragyan Ojha and Harbhajan Singh have dominated on Day 4, it is clear the match is going to be have an exciting finish. While the Indians will not mind a draw, the Australians will fight tooth and nail for a win as it is the only way of drawing the series.

In spite of the magnanimous knock by Sachin Tendulkar, the middle and lower middle order of the Indian batting line-up were wiped clean by the Australians quite quickly on the new day and the Australian batsmen were out on the field much before the Indian fans would have expected. Openers Shane Watson and Simon Katich got off to a rather quick start and the Indian seamers seemed to struggle on the Bangalore wicket in the third innings of the test. With the the Australians racing to the 50 mark, Indian skipper MS Dhoni tossed the ball to the sin duo of Harbhajan Singh and Pragyan Ojha and the two created havoc. Dismissing the openers and the dangerous Michael Clark quickly, the Indian spinner asserted themselves on the Aussie batsmen most of the early afternoon.

As reports of the 2nd test between India and Australia emerge, it is clear that Ricky Ponting (35*) and Michael Hussey (8*) will look to take a comfortable lead within Day 4.