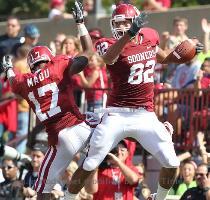 OKLAHOMA (Gaea Times.com) Oklahoma has grabbed the first position in the latest BCS rankings. BCS or Bowl Championship rankings takes into account both polls and computer generated rankings and was conducted for the first time in 1998 season. The top ten teams in the list are Oklahoma, Oregon, Boise state, Auburn, TCU, LSU, Michigan State, Alabama, Utah and Ohio State. Virgina Tech is on number twenty five. The latest BCS rankings have not pleased everyone. Some are fuming over the selection of Oklahoma for the first position when Oregon has been on the top in other rankings such as the one conducted by Associated Press. The cause is being attributed to computer generated rankings.

BCS rankings were released on Sunday night on ESPN. Oklahoma have remained undefeated in their last six games and have defeated Utah state, Florida state, Air Force, Cincinnati, Texas and Iowa state in a straight line so far. In the NCAA College Football Rankings week 8, Oklahoma is on number three with the first position being occupied by Oregon. LSU is on number six position in both the BCS rankings and the Associated Press media poll. The Tigers coach, Les Miles said, “It is nice to be recognized, but there is still so much football to be played”.

Oklahoma has still got to prove things. Maintaining the first position is not impossible but is tough. Their performance has been fantastic but they still have to deal with Oregon and Boise state. The two are strong competitors and must be aiming for the top position in the BCS rankings.