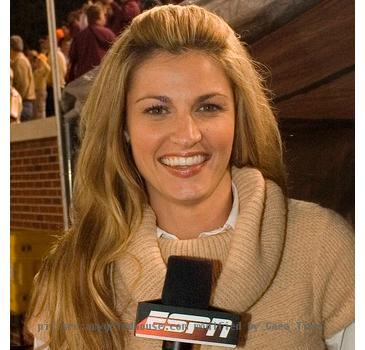 ESPN reporter Erin Andrews is on the headline again. She was in the news three months before when her peephole video surfaced on the internet. Erin filed a lawsuit in the Chicago courts against a chain of hotels for their negligence that allowed the accused photographer leaking out naked photos of her. Now, the controversy has sparked again as a reputed website has allegedly posted the sleazy photos again.

According to sources, an esteemed media company posted the peephole video violating all the laws. Previously, they were threatened by the police for posting vulgar images of Erin Andrews as well as her infamous peephole video.

Michael David Barrett was accused of capturing nude pictures of Erin through the peephole of her hotel room. The stalker was imprisoned for 30 months.

Reportedly, the American sportscaster of ESPN had asked the site to remove her naked pictures from their website and all search engines. But they didnt pay heed to her at all.

Now, Erin Andrews is thinking off taking legal action against the site if the pictures are not removed.