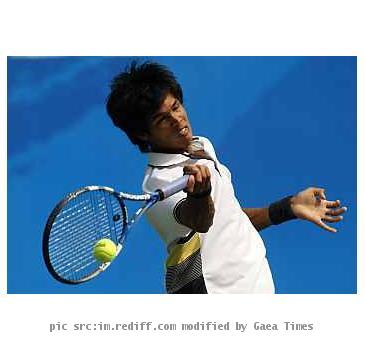 GUANGZHOU, CHINA (GaeaTimes.com)- Indian tennis ace Somdev Devvarman created history on Tuesday when he defeated his opponent Denis Isotomin in the men’s singles final of the Asian Games 2010. The win was indeed special for the young tennis player as this was the very first time that India had registered the much-coveted gold medal in the men’s singles tennis tournament of the Asian Games. In order to emerge triumphant, Somdev Devvarman beat Uzbekistan’s Denis Isotomin 6-1, 6-2 and reserved the seventh gold medal for India.

It would surely not be misleading to say that the Indian tennis ace was able to have an upper hand during Monday’s Asian Games finals almost throughout the match as Denis Isotomin slipped 0-5 in the very first set, a situation from which the top seeded player never really emerged. In the second set, Somdev Devvarman was ahead of his opponent by 3-1 before Uzbek gained control for a brief period of time. However, things failed to go in Denis Isotomin’s favor for very long as he went on to deliver a double fault in the final round which gave the Indian tennis ace the edge he needed to ensure his victory in the match.

While responding to his amazing feat at the match, a visibly delighted Somdev Devvarman later told journalists that winning the gold medal was beyond expectations and while giving his best shot he did not really think about the top prize. However, the 26-year-old tennis star emphasized that winning for his country was indeed a very special feeling. Apart from his gold medal in the men’s singles tennis event, Somdev Devvarman also bagged gold in the doubles category of the Asian Games 2010.