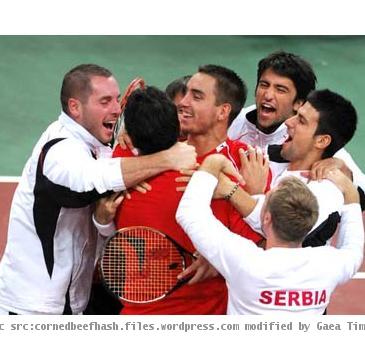 NEW YORK (GaeaTimes.com) — Viktor Troiciki seems to be the hero of Serbia after it won the title of Davis Cup beating France. Troicki came in for the higher-ranked Janko Tipsarevic with the tie level at 2-2 and played superbly to defeat Llodra 6-2 6-2 6-3 in Belgrade.

World number three Novak Djokovic had earlier brought Serbia level with a 6-2 6-2 6-4 win over Gael Monfils. Serbia are the 13th nation to win the Davis Cup since its inception in 1900.

Serbia went into the final day trailing 2-1 after Llodra and Arnaud Clement had fought back from two sets down to claim a stunning win over Troicki and Nenad Zimonjic in Saturday’s doubles rubber. Djokovic played superbly in front of a fervent crowd of over 16,000 at the Belgrade Arena as he swept past Monfils in Sunday’s opening singles to level the tie.

Fact Sheet on the United States' Relationship with the European Union: An Enduring Partnership

BELGRADE - A "sensational" discovery of 75-century-old copper tools in Serbia is compelling scientis...

Bhupathi-Mirnyi in second round of Paris Masters

Verdasco rallies from brink to victory

PARIS - Fernando Verdasco fought for his life Tuesday to stay in contention for the ATP year-end fin...