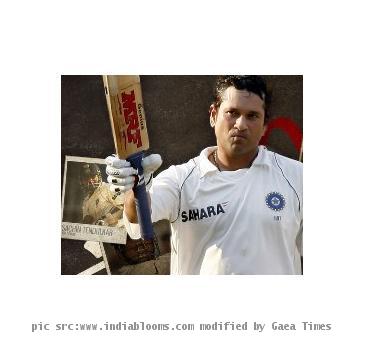 CENTURION, SOUTH AFRICA (GaeaTimes.com)- With Sachin Tendulkar reaching a major milestone in his career by scoring his 50th century in Test match, it was definitely a dream come true for all his die-hard fans in India as well as in the rest of the world. Since the Indian cricketing pro achieved the stupendous feat of earning the title of being the first cricketer to deliver 50 Test hundreds in the history of the game, congratulations poured in from various quarters with most of the celebrities taking to Twitter to offer their best wishes to the iconic batsman.

The popular micro-blogging site was abuzz with wishes and congratulatory messages on Sunday as former cricketers as well as celebrities from different fields did not waste any time in posting the tweets for the 37-year-old cricketing icon. While cricketer Yuvraj Singh described the battling maestro’s innings as the ‘greatest achievement by a batsman ever’, Sri Lankan captain Kumar Sangakkara added that Sachin Tendulkar has already achieved many things in his life and so at the moment he was just competing with himself. Former cricketer Sanjay Manjrekar also seemed to be quite upbeat about the amazing feat achieved by the Indian cricketing legend as he reiterated that this was a record of 50th Test century was surely here to stay.

Apart from the cricketing fraternity, celebs from the world of entertainment also posted congratulatory messages for Sachin Tendulkar after he reached the career milestone of scoring his 50th Test century. Melody queen Lata Mangeshkar also offered her best wishes to the Little Master, reiterating the message of millions of his fans saying that the cricketing icon had again brought glory to the nation.

MUMBAI - Five people were killed after their car fell into a river alongside the Mumbai-Pune highway...