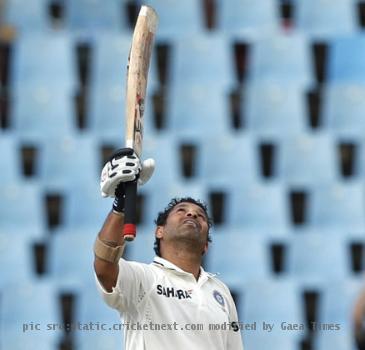 CENTURION, SOUTH AFRICA (GaeaTimes.com)- Breaking old records and creating new ones is nothing new for ace Indian cricketer Sachin Tendulkar. However, the cricketing legend added a new feather to his cap on Sunday when he went on to score his 50th Test match hundred against South Africa. As his team tried their best to save the first test match against the home team in Centurion, the 37-year-old Indian batsmen created history by becoming the very first player to score his 50th hundred in the longer form of the game.

Sachin Tendulkar was able to reach the latest landmark in his cricketing career as his team battled to save the game on day four with the Indian icon reaching stumps on 107 not out. Since the 37-year-old cricketer achieved the milestone, all his ardent followers as well as his colleagues in the cricketing fraternity are offering their congratulations and best wishes in the hope that the Little Master would create many such records in the future. As Sachin Tendulkar scored the ton on Sunday, he raised his bat in his own trademark style as the crowds gathered at the stadium cheered boisterously as did his millions of supporters in India.

While responding to the latest record that he had set in the history of international cricket, Sachin Tendulkar reiterated that although its just another number, it is indeed feels nice to have achieved the amazing feat. The cricketing ace added that the hundred was all the more special to him due to its timing as Saturday was his father’s birthday and so he dedicated the ton to him.

MUMBAI - Five people were killed after their car fell into a river alongside the Mumbai-Pune highway...