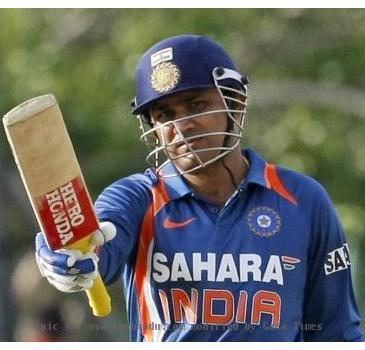 DUBAI, UAE (GaeaTimes.com)- In a bid to celebrate the 40th anniversary of one-day cricket, the International Cricket Council (ICC) has undertaken a unique initiative in which its is asking cricket enthusiasts all across the globe to vote for the dream team of one-day international cricket. The list of 48 players who have been nominated for the honor has been revealed in the official website of ICC where the netizens can select their favorite cricketing icons and vote for them. However, the Indian fans have another reason to rejoice given the fact that as many as seven Indian cricketers have bagged a position in the nomination list.

The Indian batsmen who appear in the list for selection among eight openers for the first two battling positions of the dream team include Sachin Tendulkar, Virender Sehwag as well as Sourav Ganguly. Meanwhile, ace Indian bowlers Harbhajan Singh and Anil Kumble have been nominated in the ICC list to select the lone spinner who would feature in the dream team. While Indian captain Mahendra Singh Dhoni would have to battle it out with seven other wicket-keepers in the team, ace cricketer Kapil Dev has received nomination in the list for the all-rounders.

The online voting process to opt for the dream team and the dream game in the official website of ICC would be on till January 2 and the results would be declared on January 5. The day when the result would be announced holds a special significance as it marks the 40th anniversary of the first one-day international match which was held between Australia and England.

DUBAI - The International Cricket Council (ICC) has approved the reinstatement of the Ferozshah Kot...

ICC board agrees on anti-corruption code for domestic cricket

DUBAI - The ICC Executive Board has unanimously agreed to introduce an Anti-Corruption Code for dome...

KARACHI - Even as uncertainty prevails over Pakistan cricketer Kamran Akmal's future following his i...

Enraged PCB least interested in Zulqarnain's grievances or taking him back: Sources

LAHORE - The Pakistan Cricket Board (PCB) is neither interested in taking notice of troubled...

KARACHI - In the latest development in the spot-fixing case, the conversations of tainted Paki...