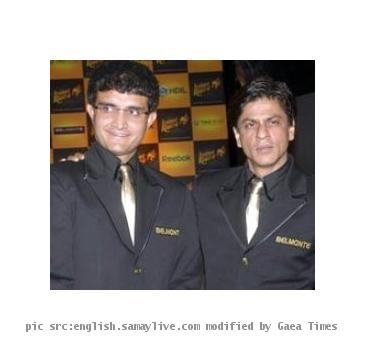 KOLKATA, INDIA (GaeaTimes.com)- This weekend of Indian Premier League (IPL) 20-20 tournament 2011 auction witnessed money raining down on the cricketers as the owners of the respective teams chose the best possible player for them. However, to the shock of the Bengalis, veteran cricketer Sourav Ganguly failed to get any bid this year. A reputed media source reported that Shahrukh Khan has recently told that his team Kolkata Knight Riders’ would be incomplete if Sourav Ganguly is not there.

Kolkata Knight Riders’ owner, reportedly, told a reputed media source that he had a telephonic conversation with Sourav Ganguly and the team officials have decided that they would use him in IPL 2011 in a different capacity. On the other hand, a local news channel reported that Sourav Ganguly was shocked to see that he remained unsold even in the second round of auction. However, the veteran cricketer, reportedly, told a reputed media source that he would not be able to say what went wrong though he feels that it is up to the teams and their owners to decide. The former captain of India team told that it is hard for him to believe that he is not among “100 odd cricketers” of the country.

The media outlets reported that Shahrukh Khan made the comment about Sourav Ganguly’s role in IPL 2011 after the people of Kolkata burnt the effigies of the actor. However, some sources are of the opinion that the Prince of Calcutta for his base price of $400,000 (Rs1.84 crore). On the other hand, though Kolkata Knight Riders’ still have $425,000 in their pocket, it was evident that they did not want to take him in the team.

GUANGZHOU - Indian men blanked Japan 3-0 while the women thrashed China by the same margin in the sq...

MUMBAI - Anurag Basu had virtually gone missing after the debacle of "Kites". But the director has n...

Tendulkar will end his World Cup career on a high: Ganguly