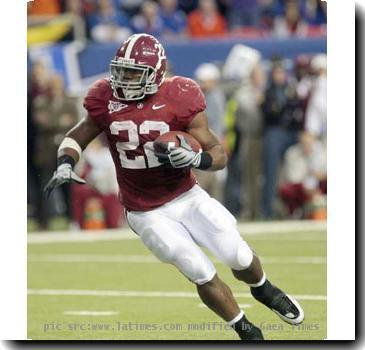 PASADENA, CALIF (GaeaTimes.com) — On Thursday night, Alabama holds on its No.1 position with a 37-21 victory over Texas in the BCS title game. It’s a momentum success for Alabama since they have beaten Texas, one of the most powerful contender of BCS championship.

It was linebacker Eryk Anders, who made the win quite easy for Alabama.

For Texas, Gilbert threw 2 TD passes to Jordan Shipley and Texas closed within 3 points after falling behind 24-6 in the first half, but late turnovers killed them.

Alabama knocked out Colt McCoy early in the first quarter.
With McCoy on the sideline nursing a shoulder injury, the Tide rolled to a 24-6 lead at halftime, the final touchdown coming when lineman Marcell Dareus picked off a shovel pass and returned it 28 yards for the score late in the second quarter.

McCoy’s injury put a huge blow to Texas’ attack. In the second half Gilbert, Texas’ “quarterback of the future” had thrown only 26 college passes.

He threw two touchdown passes to All-American Jordan Shipley to trim the deficit to 24-21 with 6:15 left, and after an Alabama punt, he had the ball at the 7-yard line, 93 yards away from one of the most improbable comeback stories in the history of the game.

Then Alabama holding penalty moved the ball to the 17, Gilbert dropped back to pass and got rocked by Anders. A few minutes later, Gilbert’s third interception of the night, Trent Richardson scored his second touchdown to make it 37-21.

Though the game featured some bizarre coaching decisions, it saw a tough fight between the two arch-rivals. Alabama once again proved their superiority in the BCS championship of NCAA college football.