Holders India knocked out by Pakistan in junior World Cup 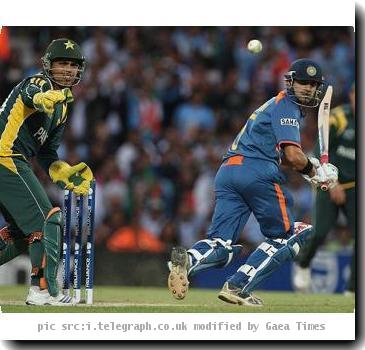 Rain reduced the match to 23 overs and, put in, India could only muster 114 for nine, but fought gallantly before losing with three balls to spare at the Bert Sutcliffe Oval.

Eventually, Pakistan chased down the target, thanks to some gritty batting by Hammad Azam, who scored an unbeaten 21 off 13 balls with two fours and one six.

The groundwork of Pakistan’s victory was done by pacer Fayyaz Butt (4-27), who rattled the Indian batting with quality seam bowling, and left arm spinner Raza Hasan, who chipped in with three wickets.

stitched 55-runs before the former was run out and India again forced their way back into the match taking wickets at regular interval.

With 24 needed off 17, Mohammad Waqas hit skipper Ashok Menaria over midwicket for a six but was out in the next ball.

Pakistan then required 16 needed off 12 and Usman Qadir (7) struck a four over extra cover to bring the equation to a run-a-ball. But he,too, fell in the next delivery run out, thanks to some smart work by Unadkat. Qadir’s shot hit the stumps at the non-striker’s end and the bails fell off, but Unadkat collected the ball and lifted the stump as the batsmen went in to steal a single.

Hammad, however, scooped Unadkat over fine leg for a four and Pakistan needed just four from the final over.

Sarmad Bhatti was dismissed off the second ball of the final over by Sharma. Hammad cut the next ball past point for a four to take Pakistan home.

Earlier, after a delayed start, Pakistan skipper Azeem Ghumman chose to field in damp conditions and pacer Butt did not disappoint. In fact, Butt shattered the stumps of Rahul Kannaur off the first ball of the innings and then dismissed Mayank Agarwal four balls later, giving a rousing start to Paksitan. India lost the openers in the first overs with just three runs on the board.