Kuznetsova shakes off frustration to win in Miami opener 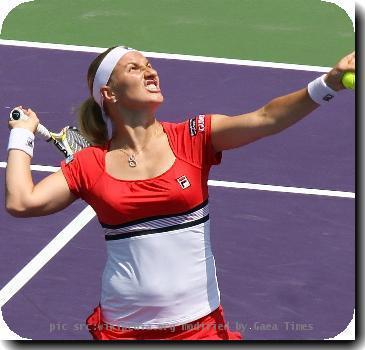 Kuznetsova, fourth in the world, Thursday spent less than two hours in earning victory over the number 65 who is returning from the appendicitis, which forced her to withdraw from February events in Pattaya City and Dubai.

The Russian has never lost in an opening match in Miami and won the title in 2006. Peng has lost her last 12 matches against top five players.

Kuznetsova, however, was displeased with the narrow victory.

“I’m not thrilled because I was getting mad with myself and I was fighting with myself,” said the two-time Grand Slam champion. “I felt the ball very well and I felt my game, but I was up and down.

Polish number six Agnieszka Radwanska got through over Russian Ekaterina Makarova 7-5, 6-0 as seeded women took to the court for places in the third round.

But another pair of seeds crashed out in disappointment at Crandon Park.

Kuznetsova’s victory was a morale booster after the Russian has suffered opening losses in her last tournament at Indian Wells, where she also headed the field.

The winner managed seven aces and broke five times on her way into a match against Hungarian Agnes Szavay, who humiliated Australian Alicia Molik 6-0, 6-0.

The 2008 French Open champion, Ana Ivanovic, won her first match since the Australian Open first round as she defeated Pauline Parmentier 6-4, 6-3.

The former number one now stands 58th after a fall in form.

“I played well today, I kept my composure and just stuck with what I’ve been working on, and I’ve been working hard,” said the Serb, who has struggled with her game for months and is now coached by Steffi Graf’s former mentor Heinz Gunthardt of Switzerland.

On the men’s side, Roger Federer said his fourth-round loss in Indian Wells was a blessing in disguise, giving him time to unwind between events in California and Florida.

“I’ve had many years where I ran from one thing to the next. That also, I welcome having all of a sudden more days off, more days of practise, more days where I can just wake up and see what I really want to do instead of having the perfect plan the whole time.

“It’s nice to adjust that for a change, if there’s anything positive to take out of a loss,” said the Swiss after a week in Miami.

“My game is where I want it to be. I’m always excited coming back here to Miami. I’ve had a lot of success here, and I’ve always enjoyed coming here.”

With all seeds given byes into the second round, less lights took the stage Thursday in first-round contests.

GUANGZHOU - Indian shooters got the country its first medal in the Asian Games with Abhinav Bindra, ...

Venus Williams pulls out of China Open due to knee injury

BEIJING - American tennis ace Venus Williams, who is recuperating from her knee injury, has pulled o...

Mikhail Youzhny slows down Spain's reign, beats Tommy Robredo in fourth round of US Open

NEW YORK, (GaeaTimes.com)- Caroline Wozniacki proved on September that she is soon to become a...

Another win for Federer lines up dangerous match against Soderling