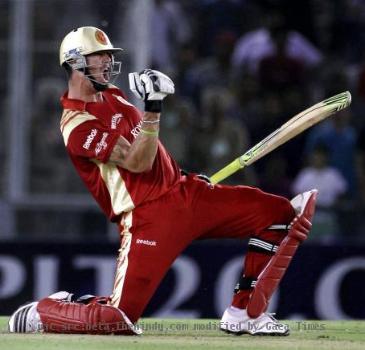 MOHALI, INDIA (GaeaTimes.com)- The home crowd at Mohali were in for yet another disappointment on Friday night as the Kings XI Punjab suffered yet another humiliating defeat against the Royal Challengers Bangalore. The Bangalore based team registered a victory against their opponents in the much anticipated match by six wickets. The KXIP Vs. RCB match indeed turned out to be a huge treat for all the fans of the Royal Challengers Bangalore as the team went ahead to win the match held at the PCA Stadium in Mohali.

The KXIP Vs. RCB witnessed stunning performances by many players such as Kevin Pietersen who scored 66 runs and remained not out while leading the Bangalore Royal Challengers to the victory. As the Vijay Mallya owned team chased a run of 182, the Kings XI Punjab seemed to be in the match till the 16th over as the next over which was bowled by Brett Lee completely transformed the course of the game. In the 17th over, the Royal Challengers Bangalore were able to score 25 runs which twisted the match completely in favor of the Bangalore based team. At the same time, significant partnerships between Kevin Pietersen and Virat Kohli as well as the fourth wicket partnership with Robin Uthappa ensured that the Bangalore Royal Challengers were able emerge victorious in the match.

Overall, the KXIP Vs. RCB match played last night turned out to be a delight to watch as it provided all the typical entertaining elements that is normally associated with an IPL match. However, the current season of IPL seems to be getting increasingly difficult for the Kings XI Punjab with the team losing one match after another.

CHANDIGARH - Dejected over the ouster of Kings XI Punjab (KXIP) from the Indian Premier League (IPL)...

We are co-operating with BCCI, other bodies: Kings XI

NEW DELHI - Kings XI Punjab said Thursday that the franchisee is co-operating with Income Tax (IT) ...

NEW DELHI/MUMBAI - Even as the top brass of the Indian cricket board huddled together to chart out t...

Modi not ready to give up yet, gets franchise support

CHANDIGARH - Consumer products giant Videocon group is still in talks to own one of the Indian Premi...

Were rules bent for IPL players' resort in Dharamsala?

DHARAMSALA - It pays to have a chief minister father. That is why Himachal Pradesh Cricket Associati...

MOHALI - "They (Kings XI Punjab) have had enough jhappis and prasad from Preity Zinta. It is hig...

MOHALI, INDIA (GaeaTimes.com)- All the fans of the Rajasthan Royals were in for a huge treat on We...