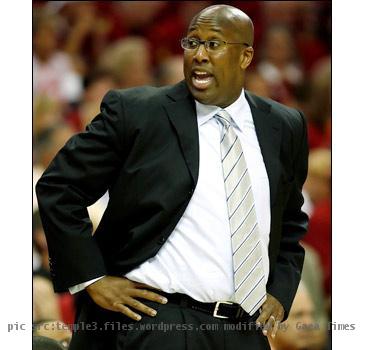 CLEVELAND (GaeaTimes.com)- It is now confirmed that Cleveland Cavaliers still has Mike Brown as its head coach. Despite rumors circulating in the web lately that Mike brown has been fired from his job as the head coach of Cleveland Cavaliers, owner Dan Gilbert has validated that the 40 year old coach is still associated with his team. The clarification of the Cleveland Cavaliers’ owner comes on heels of the widespread rumors of Mike Brown’s termination after the team’s loss to Boston Celtics in the Eastern Conference semifinals Game 6.

In press conference that was arranged on Friday at the team’s headquarters, owner Dan Gilbert brushed away the reports that Mike Brown has been fired and confirmed that the head coach still has his job at least for the moment. At the same time, the owner also added that it would take some time before a final decision is reached about Mike Brown or the team’s General Manager Danny Ferry. While refuting the claims that Mike Brown has been fired, Dan Gilbert revealed that the team management was still in the process of evaluating the current scenario as well as gathering all the necessary information. It has also been divulged that the team management intends to analyze the situation in the right manner and then reach a conclusion in this regard.

Mike Brown has been associated with the Cleveland Cavaliers for the past five seasons but is known to have gone through two consecutive unsatisfactory playoff runs. The Cleveland Cavaliers’ loss during Thursday’s clash against the Boston Celtics eliminated NBA’s best regular season team.