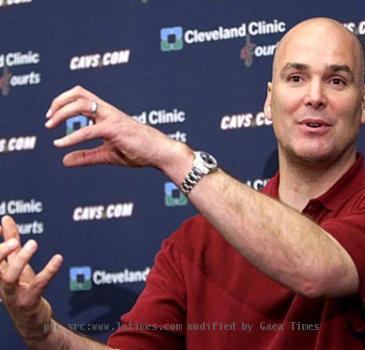 CLEVELAND (GaeaTimes.com)- On Friday the Cleveland Cavaliers suffered a major blow as Danny Ferry, the General Manager of the team resigned from his position. The move has come as a surprise for the team which is on its way to re-sign its star player LeBron James. Danny Ferry has acted as the General Manager of the team for the last five years and according to reports, he was in the last month of his contract.

Reports claim that Danny Ferry was having some differences with the Cleveland Cavaliers’ owner Dan Gilbert. The differences ranged from re-signing LeBron James to the firing of Mike Brown and the team’s future course of progress. The Cleveland Cavaliers have been going through a rough patch for the last one season. Mike Brown was fired after the second-round loss of the team to the Boston Celtics. Reports claim that Danny Ferry took the decision to leave the team after his talk with Dan Gilbert led him to believe that the two think differently about the team. Danny Ferry said to media sources that “It’s the right time to move on”.