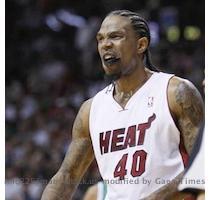 MIAMI, (GaeaTimes.com)- Sometimes ‘On field Rivalry” can even go “Off Field” and these days, the best platform to vent ones spleen on the other is definitely through Twitter. At least this is the opinion of most of the celebrities. The latest addition in the twitter war is Udonis Haslem and Paul Pierce, where the former named the latter a “Studio Gangster”.

Udonis Haslem twitted yesterday calling Paul Pierce a “Studio Gangster.” The entire tweet was more in details that asked who is Paul? He also said that he pays no attention to him and according to him, Paul Pierce is nothing but a studio gangster. He also asked the people to consult the dictionary and get the meaning of the term in order to know the real character of the Boston Celtic’s captain, Paul Pierce. This incident happened after the Miami Heats lost to the Boston Celtics for the second time in year with a score of 5-4. The dictionary meaning of “Studio Gangster” is a person who pretends to be from the streets by rapping about it. If translated, then Udonis Haslem meant that Paul Pierce is not as tough as he thinks himself to be. He talks bigger than what he performs. In a way he wanted to mean that Paul Pierce is a big talk and a wanna be. Udonis Haslem also stated on Twitter that he is here to play basket ball and is much above all these things. He does not tweet regularly and he would not have come to know about the whole issue if the others had not told him about the issue.

This all happened when Paul Pierce Twitted that morning saying that it has been a pleasure for him to have brought his talent to the south Beach and now on Memphis. That apparently was a sarcasm for LeBron James words during his ESPN-televised “The Decision”, where he announced his loyalty shift to the Miami Heats. Therefore the Heats probably had a big reason to name Paul Pierce a “Studio Gangster”