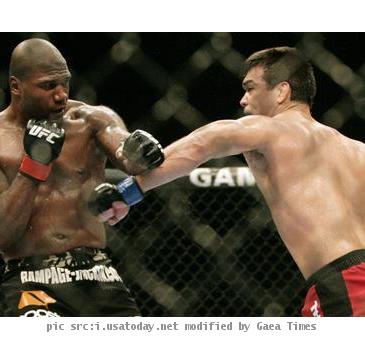 AUBURN HILLS (GaeaTimes.com)- Last night, the audience of Spike TV watched the highly anticipated bout of Quinton “Rampage” Jackson and Lyoto Machida at The Palace of Auburn Hills in the Detroit suburb of Auburn Hills, Michigan. The formal defeated the latter via a split decision though both the parties gave a tough competition to each other. The raucous crowd cheered for both the fighters as they put in their best effort to defeat their opponent.

Quinton “Rampage” Jackson defeated Lyoto Machida via split decision and after the fight the winner said in the press conference that the fight was “close” enough and he never expected that he would win the match. However, he said that he wants to give Lyoto Machida a “rematch” as he thinks the result was unexpected. Lyoto Machida showed his skill of mix strikes, weird combination of different punches and mix-martial moves. Quinton “Rampage” Jackson said that it was only his aggressive moves on the ring that earned him split decision.

Quinton “Rampage” Jackson said that he was trying to Knock out Lyoto Machida but he was “hard to hit”. Previously Quinton Jackson said that Lyoto Machida will not be able to play well as he is a boring fighter, however, somehow the latter managed to earn his respect in the bout. The audience saw that expression of surprise on Quinton Jackson’s face when the judges announced him to be the winner. Light Heavyweight bout of UFC 123 was interesting enough and it managed give ample entertainment to the audiences. The another important match of the night was Lightweight bout where George Sotiropoulos defeated Joe Lauzon via submission.

Casino owners, senators charged in Ala bingo probeMONTGOMERY, Ala. — After the governor began raid...

Casino owner, others indicted in Ala. bingo probeMONTGOMERY, Ala. — The owner of Alabama's largest...

Ala. casino heads, senators, lobbyists indictedMONTGOMERY, Ala. — The owner of Alabama's largest c...

11 Ala casino heads, senators, lobbyists indictedMONTGOMERY, Ala. — The owner of Alabama's largest...

No. 8 Sooners hope to avoid prolonged Red River Rivalry slump against No. 21 Texas

Red River RIvalry arrives for Sooners, TexasNORMAN, Okla. ? The way Bob Stoops sees it, there is no ...

No. 8 Sooners realize squeaking by could be recipe for disaster with No. 21 Texas up next

No. 8 Sooners have close shave wins, Texas nextNORMAN, Okla. ? The Sooners are squeaking a bit these...

NEW DELHI - Amid the disappointment of dropping 22 places to 160th in the FIFA rankings, there was f...