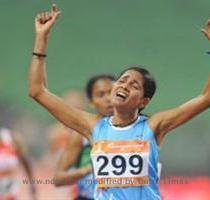 GUANGZHOU, CHINA (GaeaTimes.com)- Preeja Sreedharan made India proud today by grabbing the fourth gold for her country today at the Asian Games in Guangzhou. The athlete won the women’s 10,000 race and she was followed by her team mate Kavita Raut who bagged the silver medal. Preeja Sreedharan finished the race in 31 min, 50.28 seconds and Kavita Raut achieved the feat in just more than one second.

Preeja Sreedharan’s win in the 10,000m women’s race has added to the fantastic start that India got in the Asian Games in China. Another great news for the Indian fans came in the form of Sudha Singh who managed to bag the gold in the 3000m women’s race. Her win against China’s Jin Yuan was a rather dramatic one as the crowd support went out to Jin Yuan who made a fantastic effort towards the end of the race to make it a close and entertaining finish. Preeja Sreedharan’s performance in her own event was also memorable as she showed a huge burst of speed.

Back in Preeja Sreedharan’s hometown in Palakkad, Kerala Preeja Sreedharan’s brother and his friends were glued to the TV at the time of the race and as the athlete touched finishing line, cheers broke out in the household. He also spoke to the media and said that their mother had visited the temple and prayed to God for her daughter’s gold medal and when she was informed of Preeja Sreedharan’s win, she could not contain her happiness. He added that the mood in the house was tense as Preeja Sreedharan had performed badly in the Commonwealth Games recently.

GUANGZHOU - Indian athletes put on a scintillating display on the opening day of the track and field...

Cheers break out at Preeja's home

PALAKKAD - The prayers of Preeja Sreedharan's mother have been answered. As Preeja breasted the tape...

GUANGZHOU - The Indian campaign in the Asian Games track and field competition started in style with...

NEW DELHI - Following is the schedule on the ninth day of competitions at the Commonwealth Games Tu...

NEW DELHI - The Athletics Federation of India (AFI) Tuesday announced a 92-member squad for the Oct ...

A way to de-stress for Commonwealth Games volunteers

NEW DELHI - As pressure mounts on volunteers for the approaching Commonwealth Games in the capital, ...
Copyright© 2010 The Gaea Times