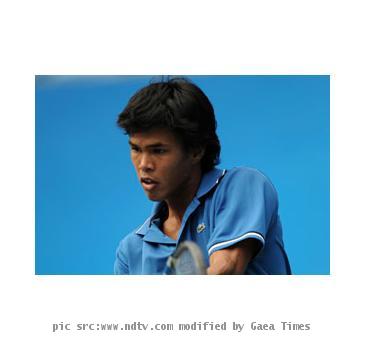 GUANGZHOU, CHINA (GaeaTimes.com)- Indian tennis ace Somdev Devvarman kept the hopes of the nation of winning the much-coveted gold medal in Asian Games alive as he cruised to the finals of the men’s singles on Monday. In order to register his slot in the finals of the men’s singles tennis tournament, the Indian player had to beat Japanese tennis ace Tatsuma Ito with a stunning 6-2, 0-6, 6-3 victory, which left his large numbers of fans highly delighted. With the win, Somdev Devvarman ensured that India would at least be able to reserve a silver medal which would be the very first time that the country would be winning the medal in the Asian Games in the tournament.

In the match that lasted for almost two hours, the Indian tennis ace was able to register the opening set without much difficulty. However, as the match gradually unfolded things started looking rather troublesome for Somdev Devvarman but the second seed was able to turn things in his favor by saving two break points in the fifth game. The fifth game was the turning point of the match as from there on the Indian player dominated his Japanese opponent that ultimately resulted in his much-anticipated victory.

While talking to reporters about his victory, Somdev Devvarman later stated that it was indeed a great match as he was able to just hung in there and save the break points in the fifth game. At the same time, the tennis ace also added that the packed schedule was not a deterrent when his performance was concerned. In the final match, Somdev Devvarman would be competing against Uzbekistan’s Denis Isotomin.

GUANGZHOU - Somdev Devvarman assured himself of a second medal Sunday by entering the men's singles ...