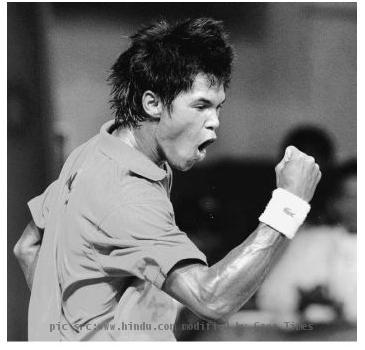 NEW DELHI, INDIA (GaeaTimes.com)- Somdev Devvarman created history on Sunday when he defeated Australian player Greg Jones by 6-4, 6-2 to win the first gold medal for the country in tennis at the Commonwealth Games. The victory was indeed something that the top-seeded player and his fans would remember for a long time to come as he became India’s very first tennis gold medalist at the Commonwealth Games. After big names like Mahesh Bhupathi, Sania Mirza and Leander Paes failed to live up to the expectations to clinch the much-coveted gold medal in tennis, Somdev Devvarman turned out to be the one who ultimately kept the hopes of the Indian fans alive.

Despite the fact that following Sania Mirza’s disappointing defeat during Saturday’s women’s singles event had put a huge pressure on Somdev Devvarman to register a gold medal, the top seeded player did not display any signs of nerves as he confidently went on with the game which enabled him to emerge victorious. While reacting to his splendid performance, the tennis ace later told reporters that his ‘emotions are inexplanable.’ Moreover, the 25-year-old player also acknowledged the huge support that he received from the crowd while adding that it was because of their unrelenting support that he was able to reserve victory.

The game which lasted for one hour and 27 minutes at the beginning showed both the players hold on to their serve. Although Greg Jones returned to the game after three breakpoints to win the fifth game, he could not hold on to the game as Somdev Devvarman went on to dominate the bout later on.