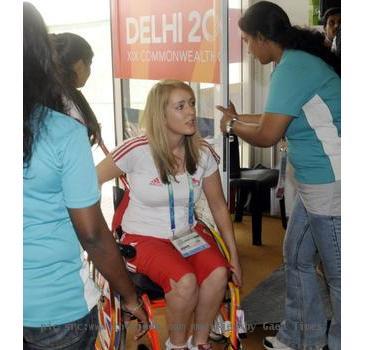 NEW DELHI, INDIA (GaeaTimes.com)- English archer Danielle Brown is sure to be one of the athletes to watch out for in the Commonwealth Games that are scheduled to start in New Delhi from tomorrow. The 22-year-old archer who suffers from a condition known as reflex sympathetic dystrophy, is sure to grab many eyeballs as she is all set to compete in the event with other able-bodied athletes. Danielle Brown who is a gold medal winner in the 2008 Paralympics which were held in Beijing, is gearing up to give her best shot in the archery competition at the Commonwealth Games this time.

Danielle Brown’s participation in the multi-sports event is indeed going to be a significant as this is the very first time that a paralympic athlete from England would be taking part in an able-bodied competition. Although many might presume that being differently-abled, her chances of clinching gold at the event might be quite low, the 22-year-old English athlete seemed to be extremely upbeat and confident about how she would fare at the Commonwealth Games while competing with the other able-bodied archers. While talking to the press on Friday, Danielle Brown described the event as a lifetime opportunity for her as this is the first time that archery has been included in the CWG while also pointing out that it would not be in the next event when it takes place in Glasgow four years from now.

The third-year Leicester University student also revealed that her boyfriend back home had inspired her participate in the qualifying round of the CWG which she passed with flying colors. Meanwhile, Danielle Brown also added that she was satisfied with the facilities provided to paralympic athletes at the Games Village.