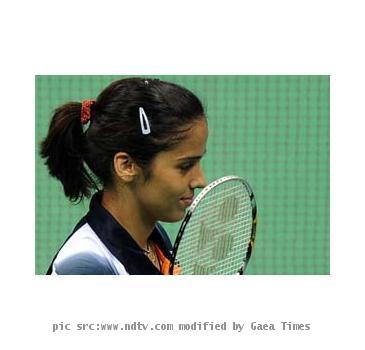 NEW DELHI, INDIA (GaeaTimes.com)- Despite top seed Saina Nehwal registering a win against Malaysia’s Mew Choo Wong in the third-tie, the host nation failed to reserve the much-coveted gold medal after it lost 1-3 to two-time world champions. By the world number three player was welcomed by the crowd with a thundering applause at the Siri Fort sport complex, any hopes of India winning the gold medal in the mixed badminton event had been dashed to the ground and the host nation had to be happy with a silver.

Saina Nehwal turned out to be the only player who emerged victorious in the summit clash in the showdown against Mew Choo Wong by an impressive 24-26, 21-17, 21-13. The mixed doubles star pair Jwala Gutta and V Diju failed to the live up to the expectations of the fans as they were defeated by Kien Keat Koo and Ee Hui Chin by 14-21, 21-10, 10-21. India’s hope to win the gold medal became all the more far-fetched when world number one Lee Chong Wei was able to clinch 18-21, 7-21 victory against P Kashyap. Lady luck was surely smiling at the defending champion Malaysian teams as they went on to retain the title in the mixed badminton event of the Commonwealth Games.

Following her stunning victory against Mew Choo Wong, Saina Nehwal told the reporters gathered at the venue that she was well aware of the fact that making a comeback from 2-0 down was indeed a difficult task. However, the star badminton player went on to say that she gave all she had to win the match as she wanted to ensure that the host nation does not go down without a fight.