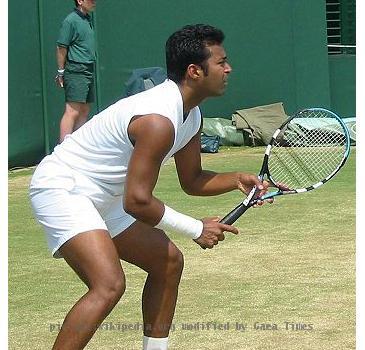 MUMBAI, INDIA (GaeaTimes.com)- Indian tennis ace Leander Paes is all set to appear on the ‘Diwali’ special episode of ‘Kaun Banega Crorepati’ and with the spoilers doing the rounds on the web, it is evident that the sports star is a die hard fan of the Big B. Leander Paes and a number of other Indian athletes, who performed well at the Commonwealth Games this year, appeared on the quiz show for the special episode. The list included Sushil Kumar (wrestler) and Jwala Gutta (badminton) and there was also the controversy prone cricketer S Sreesanth.

Leander Paes was seen all praises for the ‘Shehenshah’ in the episode that has already been shot by the network. He also claimed that he had watched Amitabh Bachchan’s hit film ‘Sholay’ more than a hundred times. He said that the ‘Deewar’ star was the main reason for his interest in films. Leander Paes also revealed that he will soon be making his foray into films and his biggest inspiration is the megastar himself. Leander Paes complimented Amitabh Bachchan throughout the show and it was evident that the film star and the sports star had a deep mutual admiration for each other.

Leander Paes is one of the best known faces in Indian tennis. With a career spanning close to two decades now, the 37 year old tennis player has been in and out of the news for his game as well as his dynamic relationship with Doubles’ partner Mahesh Bhupathi. He also performed well at the Commonwealth Games this year and bagged a bronze medal.