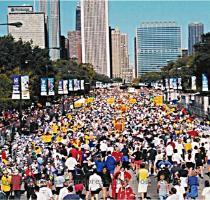 CHICAGO, (GaeaTimes.com)- The much awaited yearly event, Chicago Marathon took place yesterday and the Chicago Marathon Results 2010 were declared by the end of the event. There were 38,132 participating runners. However, it was much less than the total number who participated in the event in the last few years. The total number of participants who registered for this event about six months ago was 45,000, but not all of them turned up on the final day. Carey Pinkowski, Bank of America Chicago Marathon Executive Race Director said that the reason for such less participation may be pertained to the fluctuation of the unfavorable weather, lack of preparation or other commitments.

However, the event was successful as 36,159 out of 38,132 participants could make it till the line of finish. Although the temperature was 67 degree when the race started and 81 degrees when the race ended, it did not make any difference in the zeal of the participants. On that note, the Chicago Marathon Results 2010 was an overwhelming one. This was the 33rd year of the event, and was placed in the auspicious date of 10/10/10.

The Chicago Marathon Results 2010 were divided into two categories, male and female. Each category recognized the top ten people who could make it till the end. The results were judged on the basis of time. In the male category, the winner was Sammy Wanjiru (KEN) 2h06:24, followed by Tsegaye Kebede (ETH) 2h06:43, and the third position went to Feyisa Lilly (ETH) 2h08:10. While amongst the females, the winner was Liliya Shobukhova (RUS) 2h20:25, the first runner up was Astede Baysa (ETH) 2h23:40 and the second runner up was Maria Konovalova (RUS) 2h23:50. All of them will be awarded with a certain amount of price money.