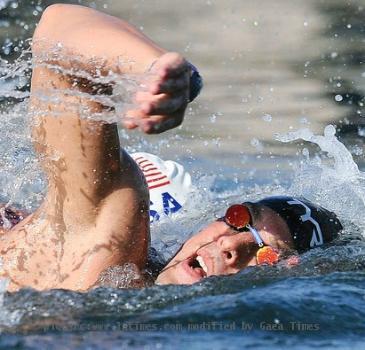 FUJAIRAH, UAE (GaeaTimes.com)- American long distance swimmer Fran Crippen breathed his last during an open water race in the United Arab Emirates yesterday. The player who returned to world class competition last year to fulfill his dream of becoming an Olympian died due to fatal heart attack, a swimming official announced the news to the media. Fran Crippen was 26 year old.

Fujairah based water sports club head Ahmed Ibrahim confirmed to a reputed media source that the preliminary tests so far indicate that the player died of heart attack. The eyewitnesses report that Fran Crippen fell unconscious during an event and he was found two hours later by the deep sea divers near the final buoy of the race. Fran Crippen took part in the 10km Marathon Swimming World Cup. The sad demise of the young swimmer has brought in a wave of sorrow to the whole sports community. The Federation International Nation Association released a statement after the death of the swimmer where it was stated that FINA and the entire “aquatic” community express their deepest and “sincerest condolences” to the friends, family, USA Swimming family and U.S. Aquatic Sports.

Even USA Swimming Sports released a statement stating that the whole organization is deeply saddened by the death of Fran Crippen. The statement also stated that Fran Crippen was a “champion swimmer” and he will be remembered for his many “extraordinary” qualities. Fran Crippen’s mother Patricia said that his son was the love of their lives and he enjoyed his life to the fullest. Dr. Julio Maglione, the FINA president said in his statement that it was the first death in a FINA event.