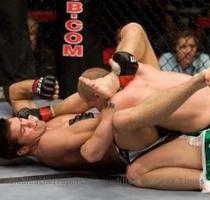 DETROIT (GaeaTimes.com)- The Main Card Lightweight bout yesterday in Detroit was rather a heart pumping one. The match apparently seemed predictable in the beginning as there seemed every chances of Joe Lauzon emerging victorious. However, by the end, George Sotiropoulos proved all the predictions wrong and registered the title. By the end of the match, the final score for the champion was 14-2, while that of Joe Lauzon was 19-6.

In the second round, with about ninety seconds left, the match took a new turn as Joe Lauzon got fatigued by then. The champion came forward to land a few punches. This was followed by grabbing his single leg and popping back up in the clinch, while they scrambled. George Sotiropoulos continued landing some more knees by grabbing a thai clinch. He got north-south, pinned an arm and got an arm bar, to be followed with some more strikes to finally win the game. He will now head towards Australia on February 27 for the UFC 127.

Congress in Kerala may be exulting too soon (Letter from Kerala)