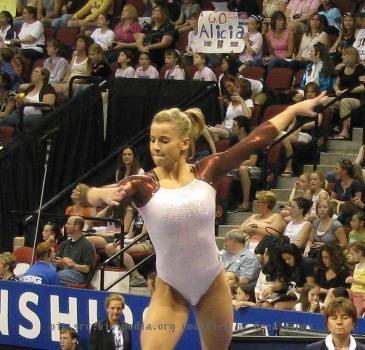 ROTTERDAM, (GaeaTimes.com)- Alicia Sacramone, the 22 year old American Gymnast once again proved her abilities when she bagged a gold in vault title and a silver in the team performance at the World Gymnastics Championships on Saturday. She is, now at par with Shannon Miller and Nastia Liukin, for being the most world medal winners by an American female gymnast.

In this event, she has beaten 16-year-old Aliya Mustafina of Russia. But the Russian challenged the final judgment, and Alicia Sacramone had to wait for at least 30 minutes for the judge’s deliberation. However, her patience paid her well, as she was declared as the winner in Vault. This added nine gold to her achievement that made her join Shannon Miller and Nastia Liukin as one of the female athletes, who bagged the maximum gold medals in World Championship. Sources say, that her victory was quite evident, as Alicia Sacramone is a much senior gymnast and has been in this field from 2002. This gave an edge over Aliya Mustafina. She scored an average of 15.200, the average of her two vault scores. She first performed a front handspring Rudi, with a hop on landing. Her second vault was a was a Yurchenko double. She scored 15.400 and 15.000 for both the performances respectively.

However Aliya Mustafina, was not too far behind, as she scored an average of 15.066, and reportedly stood second because of some a technical deficiency. Aliya Mustafina, was followed by the Brazilian Gymnast Jade Barbosa, with an average score of 14.799. She ended up with a gold. Alicia Sacramone, with the World Gymnastic Championship, became the second U.S. woman to win a world vault title, and collected four vault medals, apart from the nine World Championship medals.