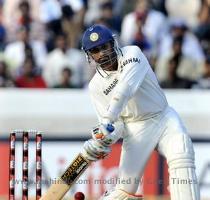 HYDERABAD, INDIA (GaeaTimes.com)- After dominating on the first two days of the second test, all that stood between New Zealand and their test win against India, was Harbhajan Singh. After demolishing the inexperienced New Zealand bowling attack in the first test, the Turbanator played another blistering knock to rule out any chances of an Indian defeat in Hyderabad.

New Zealand started off well on Day 1 and looked set for a 400+ score in the first innings. On the second day, however, the disciplined Indian attack ensured that the Kiwi tail did not wag enough and they were wrapped at 350. For India, the chase went well till wickets started to crumble after the dismissal of Raina. At 367/9, it looked like the lead in the first innings would only be marginal and a tough battle was ahead. Harbhajan Singh took matter into his own hands at this juncture and produced another blistering knock that was even quicker than his century in the first test.

With S Sreesanth at the non-striker’s end, Harbhajan Singh milked the New Zealand bowlers like school kids. At the end of the Day 3, the Turbanator had got 85 at almost run-a-ball an the Indian lead already started to look intimidating. He scored another 36 on the morning of Day 4 till Daniel Vettori removed S Sreesanth from the other end. The knock (111*) included 7 sixes and 7 fours and it was Harbhajan Singh’s second consecutive century in the series. The off spinner, however, has not only sizzled with the bat but also spun his way into the New Zealand batting line-up in the first innings.

NAGPUR - An excellent display by the Indian bowlers saw New Zealand being reduced to 148 for seven i...

NAGPUR - Scoreboard on the opening day of the third cricket Test between India and New Zealand here ...

NAGPUR - New Zealand were struggling at 148 for seven against India at stumps on the first day of th...
Copyright© 2010 The Gaea Times