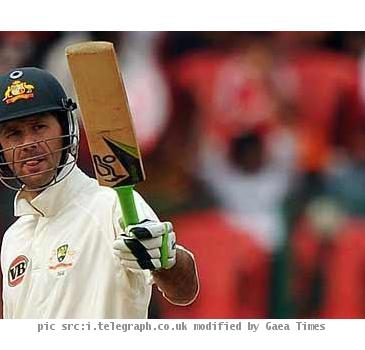 BANGALORE, INDIA (GaeaTimes.com)- In what is turning out to be one of the most topsy-turvy series of recent years, the first day of the 2nd test between India and Australia showed that both sides are willing to fight tooth and nail for a win in Bangalore. Australia dominated the first session but soon gave in to the Indian spinners in the second. Marcus North finally, led the charge towards an Australian comeback into the test.

Leading from the front on the first day of the 2nd test was the Australian captain Ricky Ponting, who showed that Indian soil too is no more beyond his comfort zone. In spite of the heart breaking loss in the first test, the Australians played with a positive intent throughout the day and kept the scoring rate high. Ricky Ponting had two important partnerships, the first with Michael Hussey and the second with Marcus North. Looking en route to another test hundred, the Australian captain became the unlikely victim of Suresh Raina. In spite of Australia looking slightly struggling at 132/3, especially with Harbhajan Singh getting into the groove, it was Marcus North who took over after the skipper went and held on for a resilient partnership with Tim Paine.

Though the Indian bowling looked toothless initially on the day, it was Zaheer Khan who continued to keep the Australian batsmen under pressure. In the second session, Harbhajan Singh dominated but gave away more runs than MS Dhoni would have liked. As reports emerge of the second day, Marcus North is seen continuing with the previous day’s form and the Australians look set to reach a massive score in the first innings of the 2nd test.