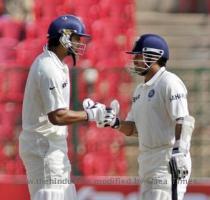 BANGALORE (GaeaTimes.com)- Indian batting maestro Sachin Tendulkar has stamped his authority on the Australians on Day 3 of the second test at Bangalore. Starting almost at the same score as partner Murali Vijay, the Indian little wonder raced ahead and scored his 49th test hundred, a feat that even the best of batsmen can only dream of. Though the Australians put a rather brave score in the first inning thanks to centurion Marcus North, and then made early inroads into the Indian batting by dismissing Virender Sehwag and Rahul Dravid before the close of play on Day 2, the advantage seemed to have been snatched away brutally by the Sachin Tendulkar-Murali Vijay partnership that showed no signs of buckling in the first session of the 3rd day.

The inning is a special one for Sachin Tendulkar as he reached the milestone of 14,000 test runs on Day 2 when he finished on 44*. On Day 3, the Indian batting legend came out all guns blazing and milked the Australian bowlers life school kids. Ricky Ponting who severely missed veterans like Shane Warne and Glenn McGrath in the bowling line-up. Sachin Tendulkar brought up his century with a huge hit over the long on boundary.

Sachin Tendulkar continued the assault of the Australian bowlers after reaching his century and the Indians are presently looking en route to a comfortable lead over the Australians. Murali Vijay, who acted as the foil to the Sachin Tendulkar till the latter reached the milestone, opened his wings later in the session and looked at ease against the somewhat toothless bowling. He reached his maiden test century in style and the run fest indicates the match could well be heading for a draw which means an Indian series win.