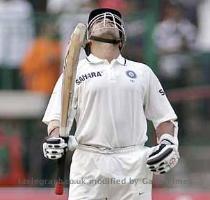 BANGALORE, INDIA (GaeaTimes.com)- The 2nd test between India and Australia has turned into an evenly poised contest thanks to Sachin Tendulkar. Posting his 49th test in the session that belonged to India, Sachin Tendulkar took away all the chances of an Australian comeback into the game. In spite of Australia getting two crucial breakthroughs towards the end of Day 2, Murali Vijay and Sachin Tendulkar took matters into their own hands with well paced knocks.

Day 2 of the 2nd test belonged to the Australians who made a strong comeback from a rather wobbly position with the help of Marcus North. Also getting into the groove was the Australian skipper Ricky Ponting who made the most of the easy paced track. Reaching a reasonable and safe score of 478 in the first inning, the early wickets gave the men from down under strong hopes of equaling the series. Things, however, turned out not so rosy for Ricky Ponting’s men as Sachin Tendulkar proved that a lot of cricket is still left in him on Day 3. In a knock that made the Australian bowling look almost juvenile, the Indian batting maestro reached another milestone with a huge six over wide long-on off Nathan Hauritz who appeared somewhat hapless against the Indian batsmen throughout the day.

The new Australian bowling attack has so far been unable to put any significant pressure on the Indian batting on Day 3. It is however expected that Ricky Ponting will come up with a fresh new game plan and try his best to come back into the game.