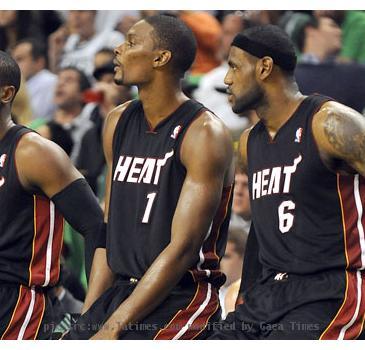 BOSTON (GaeaTimes.com)- The three big players of Miami Heat could not save their team last night as they played the much anticipated match against Boston Celtics. Dwayne Wade, Chris Bosh and LeBron James disappointed their aficionados as Boston Celtics defeated them with 80-88 score. Ray Allen of Boston Celtics shined in his performance as he scored 20 for his team. However, this loss gave the Miami Heat players a chance to be under scanner and specially former Cleveland Cavaliers’ star LeBron James has been criticized the most for the game.

However, the former NBA Most Valuable Player was the highest scorer of the match with 31 points yet he was subjected to severe threats, taunts and abuses on the court from the audience as he could not make his team win. While asked about the show opener, he said that the whole experience was a “feel out process” as he was not accustomed to threats while on the court. The Boston Celtics players decided to play defense as they knew Miami Heat players would leave no stones unturned to win the match against the Celtics. However, after all the efforts the trio of Miami Heat could make only 17 of their 48 shots in the whole game.

Miami Heat players expressed their disappointments to a reputed media source after the match. On one hand Chris Bosh seemed ineffective in the whole game as he feels winning and losing is a part of the game and he feels every player will settle down with the defeat with course of time. The Big Three of Miami Heat could not sizzle in the match and could score only 11 of their 41 shots in their first half. Boston Celtics scored 16 on their first quarter, 29 on the second, 18 and 25 in their third and fourth quarter respectively.