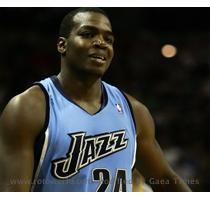 MIAMI, (GaeaTimes.com)- Not too often has Utah Jazz been able to perform as spectacularly as yesterday. However, if a player like Paul Millsap gets charged up with full spirit, anything can happen. It was a great day for Utah Jazz as they defeated Miami Heat in the second quarter, with a 116-114 overtime victory, in the home ground of their opponent at American Airlines Arena in Miami.

Before Paul Millsap got pumped up, the Jazz were trailing with 22 points late in the second quarter. However, the valiant player came rushing in to make his career’s best 46-point performance to for a 3 for 3 in three pointers, after he entered the game at 2-for-20. This 3 point was scored in the fourth quarter of, which rather recovered his team from the 22 points deficit. Miami Heat guard Dwyane Wade, tied the game at 114 on a baseline three-pointer while 17 seconds were left in overtime. However, that was the final score made by the Miami Heats, as the game was immediately taken over by Utah Jazz. Utah, who had a score of 1 for 7 on three pointers in the first quarter, made a remarkable improvement with remarkable score of 7 for 12 in the fourth quarter and overtime. The team has a negligible 13 points in the first quarter, which made every one think that the Heats would win. However, it rose up to 42-point fourth-quarter, that diminished the 75-62 deficit by 13 points. Then the game was sent to an overtime with 104 points in Utah’s bag, when C.J. Miles missed a three-pointer, and Paul Millsap tactfully put back the miss with one second left.

After the loss, Dwyane Wade, who scored 10 overtime points felt that as a team, the heats got a bit panicked. Heat’s coach, Erik Spoelstra, was extremely disappointed with the loss and could only tell his team to “Learn”, from Paul Millsap after an unexpected defeat.