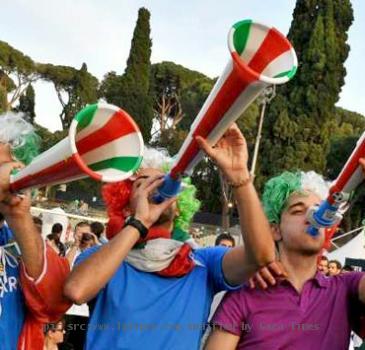 JOHANNESBURG, SOUTH AFRICA (GaeaTimes.com)- Some called them to be a racket of “angry bees” and some turned the volume off on their television sets when they play their instrument. Anyone keeping a track on the World Cup must have heard of the Vuvuzelas. Reportedly, the Vuvuzelas has been the center of discussion for quite some time and if the ban orders aren’t imposed on them then it shall continue to be the same for the rest of the month.

Several networks covering the football World Cup have received complaints from the viewers about the Vuvuzelas which the football fans are blowing in unison. In short, the sound of the instruments are annoying but there is no one who would put a stop to this. Even Sepp Blatter who happens to be the President of FIFA has snubbed down all complainant reports which asked for a ban to be imposed upon the Vuvuzelas.